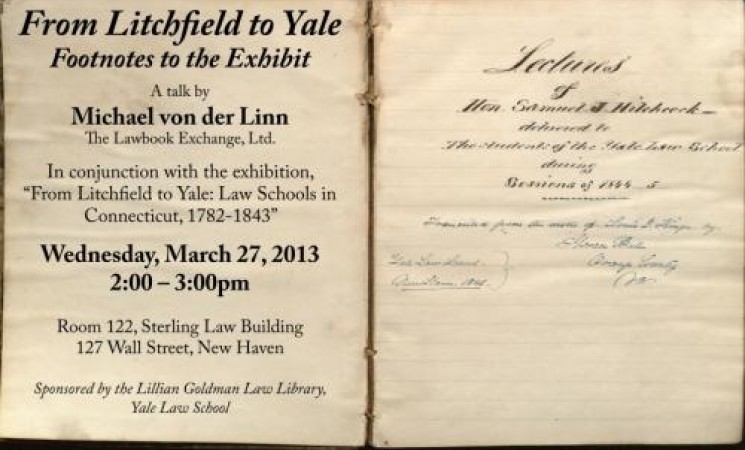 From Litchfield to Yale: Law Schools in Connecticut, 1782-1843
An exhibition talk
by Michael von der Linn

The speaker, Michael von der Linn, is guest curator of the Yale Law Library’s current exhibition, “From Litchfield to Yale: Law Schools in Connecticut, 1782-1843.” Since 2001, von der Linn has been Manager of the Antiquarian Book Department at The Lawbook Exchange, Ltd., one of the world’s leading dealers in antiquarian law books. He holds a Ph.D. in musicology from Columbia University. Von der Linn has an ongoing interest in the history of American legal education. The Summer 2010 issue of The Green Bag included his article, “Harvard Law School’s Promotional Literature, 1829-1848.”

The talk, entitled “From Litchfield to Yale: Footnotes to the Exhibit,” takes place at 2pm on Wednesday, March 27, in Room 122 of the Sterling Law Building (127 Wall Street) on the Yale University campus. The talk is free and open to the public.

The exhibition is open to the public, 9am-10pm daily through May 31, in the Rare Book Exhibition Gallery of the Lillian Goldman Law Library. It was curated by Michael von der Linn and Mike Widener, the Law Library’s Rare Book Librarian. It can also be viewed online here in the Yale Law Library Rare Books Blog.