"Cause of Death": notebooks kept by an early expert pathologist in London 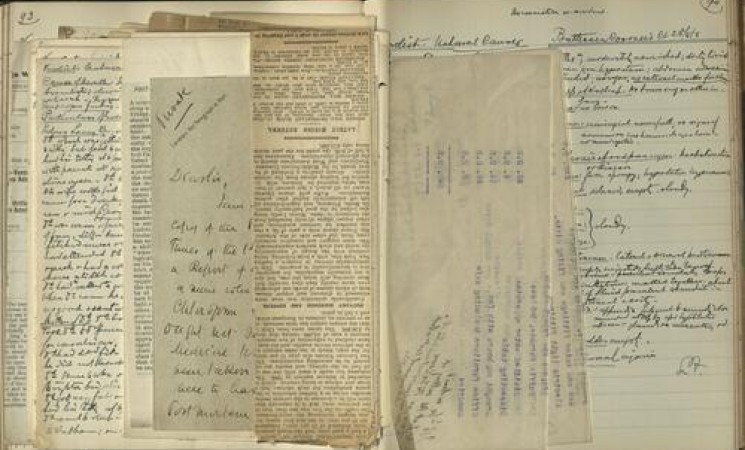 The Rare Book Collection has acquired two manuscript notebooks kept by Ludwig Freyberger, physician and early expert pathologist at the turn of the 20th century in England.   Originally from Austria, where he trained in Vienna as a physician, Freyberger was a prominent London physician and barrister-at-law at the Middle Temple.  Nominated as an expert pathologist in 1902 by John Troutbeck, Coroner for the City and Liberty of Westminster, Freyberger kept detailed notes of his postmortem investigations, recording both his own notes on the cause of death and the jury’s verdict.  Covering 1902-3 and 1908, the notebooks touch on Freyberger’s findings both in notorious trials, such as the case of George Chapman–a convicted serial killer, named as Jack the Ripper by an inspector working with the case–and in the daily trials overseen by the courts of Westminster.  Freyberger’s notes highlight the differences between the causes of death and the meanings ascribed to those deaths by the criminal justice system, for instance “wilful murder,” in the case of the woman who died from pneumonian and septic blood poisoning following an illegal abortion.

The expert witness was by no means a straightforward role in the early 20th-century British court. Freyberger’s notebooks document a moment of historical transition towards an idea of “scientific” analysis in the criminal justice system, one politicized and vocally contested by many of his fellow physicians and members of the Royal College of Physicians and the Royal College of Surgeons.

Acquired from Jarndyce, the notebooks offer an unusual moment of insight into the view of the expert witness in an early 20th-century English court.  They also add to the Rare Book Collection’s extensive documentation of official and popular perspectives on the trial, ranging from holdings of the Proceedings of the Old Bailey Sessions through tabloid accounts of abortion, murder, and other criminal trials in popular reporting.