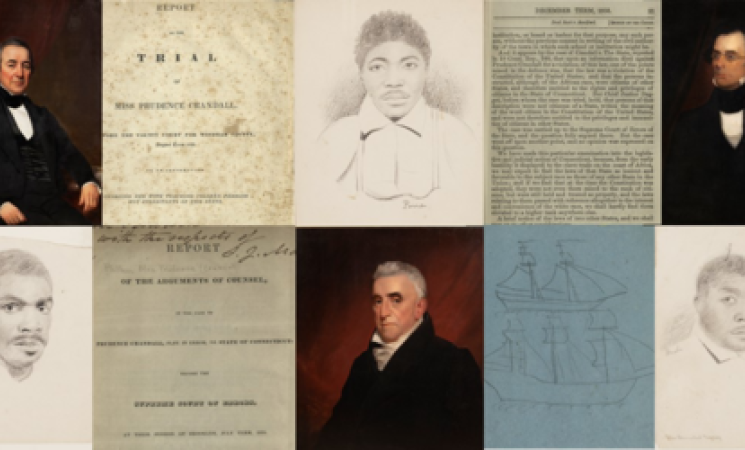 In 1824, the Yale College catalog included the names of some of the students of the private law academy established in New Haven by Seth Perkins Staples, B.A. 1797, and later overseen by Samuel Hitchcock, B.A. 1809, and David Daggett, B.A. 1783. This moment marks one of the earliest associations of the New Haven law school with Yale College, a relationship that was later formalized by the establishment of Yale Law School.

What was the role of slavery in the lives, work, and law instruction of the founders of the Yale Law School? This exhibition represents only one of many possible responses, as a contribution to a broader discussion of this question. It takes as its point of entry the founders’ involvement in two of the formative law cases relating to slavery and race in antebellum America: in 1831, the trial of Prudence Crandall for admitting young Black girls as students in her Connecticut school; and in 1839–41, the trial of the West African men and children, victims of an illegal slave trade, who had seized control of their transport ship, the Spanish L’Amistad.

These two cases were situated within the New Haven and New England law communities and against a broader national context. The same decade that saw the Prudence Crandall and Amistad cases also brought the fierce opposition by Daggett, Hitchcock, and other white New Haven eminences to the establishment of a “Negro College.” In 1833, the “Black Law” prohibited the teaching of any Black student not resident in a Connecticut town without the town’s permission. Years later, in 1857, Daggett’s ruling in the Prudence Crandall case would be prominently cited as a precedent in the Dred Scott v. Sandford decision.

In following the work of Daggett, Staples, and Hitchcock through these two cases and their consequences, the exhibition makes visible the ways in which white abolitionist and pro-slavery advocates worked with and alongside each other within a law community and within a world informed by racism and white supremacy. Drawing on original documents and contemporary publications, the exhibition traces the work of David Daggett, Seth Perkins Staples, and Samuel Hitchcock and their long influence on American law through the twentieth century.

For further information on the exhibit, including an events calendar and pdf of the exhibit essay, please visit the exhibition website.

Note: Because of the current Yale Law School covid protocol, the exhibition is open only to the Yale community, Monday-Friday, 8am-8pm.

Top, from left to right:

Bottom, from left to right: