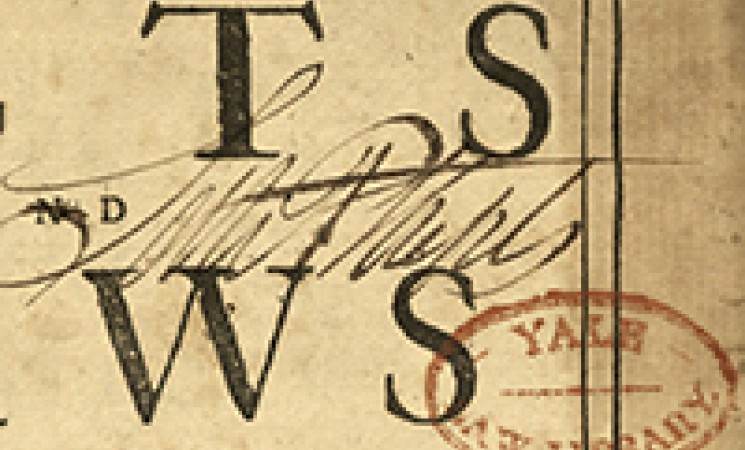 In this Thanksgiving season, one recent gift the Lillian Goldman Law Library is thankful for is a pair of books that were part of the Yale Law School’s original library. Sold by the law school as duplicates 145 years ago, they returned last year as a gift from the estate of John Edwin Ecklund (Yale ‘38, Yale Law ‘41) via his widow, Constance Ecklund.

The two volumes are intimately tied to the history and growth of the Yale Law School and its law library.

Acts and Laws of His Majesty’s English Colony of Connecticut in New-England in America (New-London: Timothy Green, 1750) bears the bold signature of Seth P. Staples (1776-1861), the first instructor in the private law school that evolved into the Yale Law School. On the flyleaf Staples wrote “Bought at the Auction Room”.

Acts and Laws of the State of Connecticut, in America (New-London: Timothy Green, 1784) is inscribed on the title page by Samuel J. Hitchcock (1786-1845), Staples’ law partner and the school’s proprietor (along with David Daggett) after Staples departed for New York City in 1824. The title page also bears the crossed-out signature of the book’s first owner, Samuel Bishop (1723?-1803), who served as mayor of New Haven, chief judge of the county probate court, justice of the peace, town clerk, and Collector of the Port of New Haven.

These collections of Connecticut statutes would have been indispensable resources for Staples and Hitchcock in their law practice, for their students, and for the members of the New Haven bar who used their library. The library was the primary reason the school survived after the death of Hitchcock in 1845, when members of the bar convinced Yale to take over the school and helped raise the funds to purchase the library.

In 1869 the Yale Law School was again threatened with closure, due to the death of Professor Henry Dutton. Once again the New Haven bar was instrumental in the school’s survival, and for the same reason: access to the school’s law library. It was decided that the third floor of the new County Court House would be reserved for the Yale Law School and its library. The library began moving into its new quarters in January 1873. It was at this moment – January 30, 1873, to be exact – that these two books left the library. They bear identical inscriptions on their front pastedowns: “Yale Law School Library / Duplicate and sold to Johnson T. Platt / January 30, 1873 / Simeon E. Baldwin / Treas. Law Department”.

Simeon E. Baldwin (1840-1927) and Johnson T. Platt (1844-1890) were two of the three young New Haven attorneys (William C. Robinson was the third) enlisted as faculty in the rejuvenated Yale Law School. Baldwin remained on the faculty for a half century, during which he also served as chief justice and governor of Connecticut, and as president of the American Bar Association, which he helped found. Platt was a popular professor until his untimely death at the age of 47.

These two books contain the earliest evidence I have seen of weeding the collection. It wasn’t until years later that the library’s original collection became cherished as “the oldest extant mementos of the early history of the Yale Law School,” as Law Librarian Frederick Hicks wrote in 1935. It was Hicks who gathered the remnants to form the Founders Collection, now one of the crown jewels of our Rare Book Collection. By that time the original collection of 2,260 volumes had dwindled to only 386. Today, thanks to discoveries and the Ecklund gift, the Founders Collection stands at 430 volumes. As Hicks observed, “If henceforth we treat them with reverence, the contrast with their former experiences will be great. They bear the scars of use and misuse, and reflect the lean years through which the law library itself more than once has passed.”

For the early history of the Founders Collection, there is no better source than Frederick C. Hicks, Yale Law School: The Founders and the Founders’ Collection (New Haven: Yale University Press, 1935), which is also available online. For the school’s 1873 move to the New Haven County Court House, see Frederick C. Hicks, Yale Law School: 1869-1894 Including the County Court House Period (New Haven: Yale University Press, 1937). Both works also have thorough biographical sketches of the principal actors.

The Lillian Goldman is grateful to John Edwin Ecklund for acquiring these volumes and to his estate for sending them home.