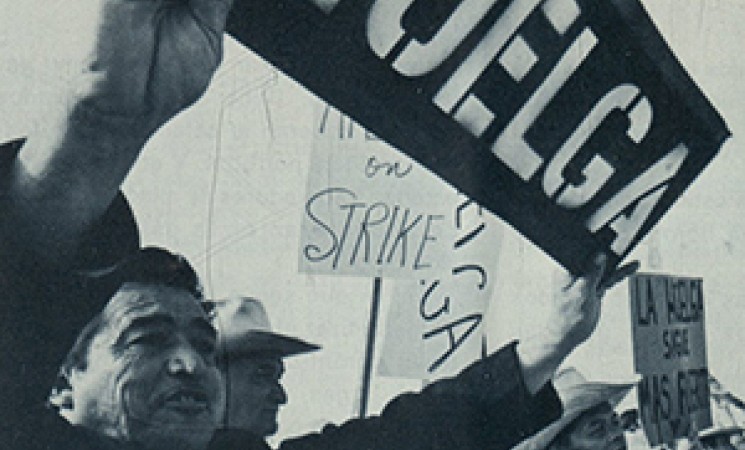 As Hispanic Heritage Month draws to a close, this is an opportune moment to highlight recent acquisitions that form part of that heritage. These works illustrate the span of the Rare Book Collection’s Hispanic holdings.

The image at right comes from a bilingual pamphlet, “Right to work” laws– a trap for America’s minorities / “El derecho a trabajar”– una trampa para los minorías EE UU (Delano, California, 1968?), authored by two of the leading civil rights activists of the 20th century, Cesar Chavez and Bayard Rustin, and jointly published by the organizations they led, namely the United Farm Workers AFL-CIO and the A. Philip Randolph Institute. The pamphlet denounces “right-to-work” laws as anti-democratic, “destroying the institution of collective bargaining, and thus keeping minority workers at the bottom of the economic ladder.”

Another recent adition to our Law & Modern Social Movememts Collection is The Sleepy Lagoon Case (Los Angeles: Citizens’ Committee for the Defense of Mexican-American Youth, 1942). Following a party the night of August 2, 1942 at the Sleepy Lagoon Ranch near Los Angeles, a young man named José Díaz left the party and was later found dead on the road. A police round-up followed, and 17 Mexican American youths were convicted of murder and assault on flimsy evidence. The convictions were widely viewed as evidence of racism. The pamphlet opens with an introduction by film director Orson Welles, and closes with the exhortation: “You can help to crush the Axis Fifth Column in our midst by helping to free the 17 boys convicted in the Sleepy Lagoon Case. Much Axis propaganda has been made over these unjust convictions.”

Moving back in time is Lamentos del Sargento Ignacio Jiménez (Mexico City, 1912), a broadside of verse in which Sargent Jiménez bids his family farewell as he awaits execution for the murder of his commanding officer, and urges others to not follow his bad example. The broadside is adorned with a woodcut by the famous Mexican illustrator José Guadalupe Posada.

A much earlier Mexican acquisition is Relación jurídica de la libertad de la muerte intentada contra la persona del R.P. Fr. Andres Picazo (Mexico City, 1769). W.S. Cotter Rare Books, who sold us this item, provides a helpful summary: “On the 11th of February, 1769, a certain Manuel Carrera, burdened with the task of arranging the repair of a watch owned by the convent of San Francisco in the city of Querétaro, approached Father Andres Picazo in his chambers at the Church of the Province of San Pedro and San Pablo of Michoacan, and, following a dispute over just what the watch required, shot, stabbed, and pistol-whipped the good Father, whose only act of defense was to pray to the Holy Image of Our Lady of Pueblito. Father Picazo survived. The present pamphlet comprises a graphic account of the assault, a thorough narrative of Carrera’s subsequent attempted-murder trial, and a history of the Lady of Pueblito as intercessor and converter of idolators.”

Early modern Spain produced some of Europe’s most influential jurists. One of these was Balthazar Ayala (1548-1584), whose De jure et officiis bellicis et disciplina militari libri III (Antwerp, 1597) argued that civilians cannot be intentionally targeted by military forces. First published in 1582, this work was reprinted in 1648 and 1793.