New on the shelves: The Trial of Queen Caroline 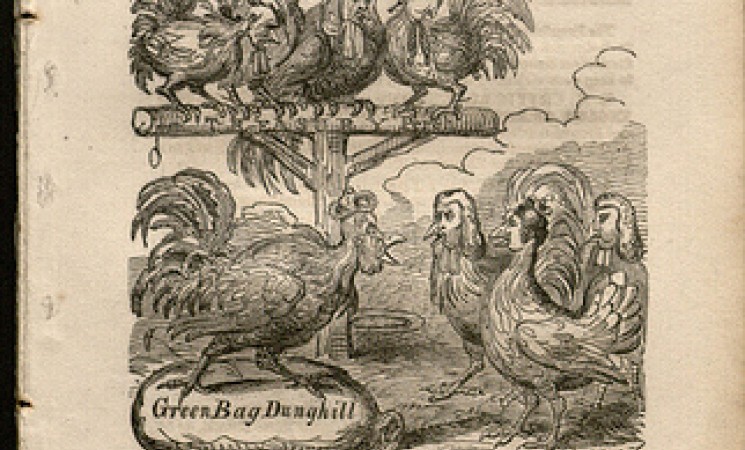 We recently acquired 18 pamphlets, many of them illustrated, on the 1820 trial of Queen Caroline of England, one of the most sensational events of Regency England. Her husband, the unpopular King George IV, put her on trial for adultery in the House of Lords, in an effort to dissolve their marriage.

While serving as Regent during the incapacity of his father George III, “Mad King George”, the future king acquired a reputation as a spendthrift, a drunk, and a womanizer. His arranged marriage to Caroline, a German princess, was never a happy one, and they separated soon after the birth of their only child, Princess Charlotte. Caroline departed for Europe and rumors later circulated that the head of her household, the Italian courtier Bartolomeo Bergami, was her lover.

Upon the death of George III in 1820, Caroline’s husband took the throne as George IV, and Caroline returned to England to claim her place as the queen consort. He retaliated by introducing the Pains and Penalties Bill in Parliament, declaring Caroline guilty of adultery and granting him a divorce. By this time George was intensely unpopular with the British public, who took the Queen’s side. The reform movement adopted Caroline as their figurehead.

The trial generated a huge amount of press coverage, pamphlets and broadsides, such as the example shown here: The R–l Fowls, or, The Old Black Cock’s Attempt to Crow over His Illustrious Mate(7th ed.; London: Printed for Effingham Wilson, 1820). They are forerunners of the tabloid press and the satire of Monty Python.

Our newest Flickr gallery, The Trial of Queen Caroline, displays all our holdings on the trial, including over twenty pamphlets and six multi-volume accounts of the trial, most of them copiously illustrated. As a whole, they can support research on the press, gender issues, divorce, popular illustrators, the British monarchy, and many other topics.


For more on the trial, see the Wikipedia article, “Pains and Penalties Bill 1820”; the online article by Carolyn Harris, “The Trial of Queen Caroline in 1820 and the Birth of British Tabloid Coverage of Royalty”; and the book by Jane Robins, Rebel Queen: The Trial of Caroline (Simon & Schuster, 2006).