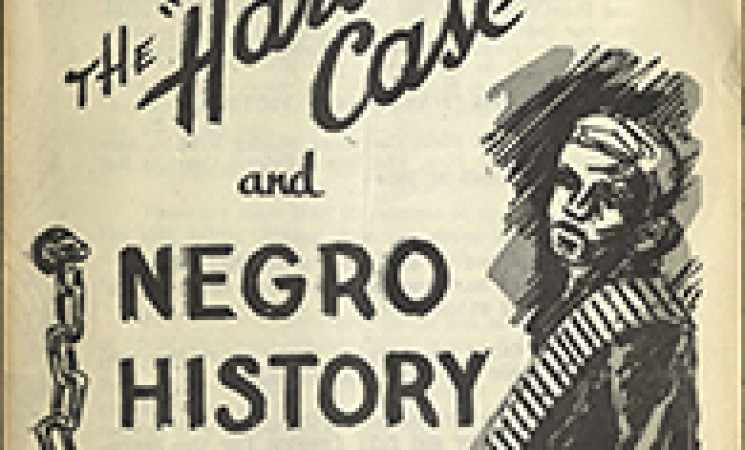 This year we mark African-American History Month by featuring recent acquisitions that document less well-remembered episodes in African-American history, most of them from the Red Scare that followed World War II.

The “harboring case” and Negro History Week (Los Angeles: Civil Rights Congress, 1954?) seeks support for five defendants accused of “harboring” leaders of the Communist Party USA, comparing them to the abolitionists who harbored Frederick Douglass and Harriet Tubman. “They dared to associate with those whose only ‘crime’ has been to oppose the McCarthyite hysteria and witch-hunts,” says the pamphlet. “They never harbored anything but ideas of peace, democracy and full freedom for the Negro people.” The title recalls the origin of African-American History Month as Negro History Week, first celebrated in 1926 in the second week of February.

Two recent acquisitions concern the case of Rosa Lee Ingram and her sons, a case that generated nationwide press coverage in the post-war years. Rosa Lee Ingram was a widow sharecropper with twelve children in Ellaville, Georgia. She and two of her sons were sentenced to the electric chair, essentially for defending themselves from a brutal attack by a white neighbor. They were convicted by an all-white jury in a one-day trial, having met their attorney only the morning of the trial. The NAACP and the Civil Rights Congress pursued appeals of the convictions, but it was the efforts of African American women’s organizations that are credited with winning commutation of the sentences to life in prison in 1949, and the Ingrams’ release on parole in 1959. Our two pamphlets were produced by the Communist Party, which at that time often competed with the NAACP for leadership in the civil rights movement. For a detailed account of the Ingram case, see Charles H. Martin, “Race, Gender, and Southern Justice: The Rosa Lee Ingram Case,” American Journal of Legal History 29:3 (July 1985), 251-268; available in JSTOR or HeinOnline. For a brief account, see the article in BlackPast.org.

Defend the negro sailors on the U.S.S. Philadelphia (1940?) arose from a protest by fifteen African American sailors. In an open letter to the Pittsburgh Courier they wrote: “We sincerely hope to discourage any other colored boys who might have planned to join the Navy and make the same mistake we did. All they would become is seagoing bell hops, chambermaids and dishwashers.” The letter led to their dishonorable discharge, but also to protests from other Navy mess men and from the African American community, and to meetings of NAACP leaders with President Roosevelt. Doris Kearns Goodwin mentions the incident in No ordinary time: Franklin and Eleanor Roosevelt; the home front in World War II (2013).