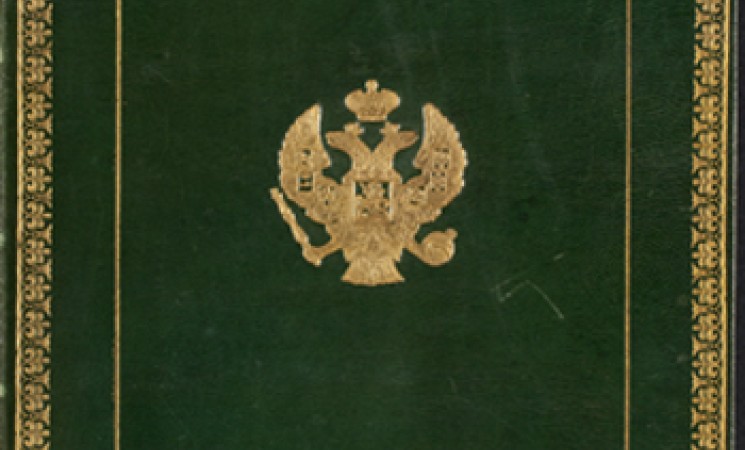 Heraldic devices were – and still are – sources of pride for individuals and families.  Arms traditionally denote rank within a nobility, indicate prestigious associations and suggest aspects of personal and familial identity.  In medieval Europe, arms became customary for nobles who constituted a distinct military caste, and evolved by the Renaissance into signs of privilege and self-branding.

The creation and elaborate description, or blazoning, of arms was not restricted to families of European lay nobility, but extended to churchmen, cities and other corporate entities (one example is the beautiful Russian imperial arms at left).

Armorial bindings, often showing the heraldic device stamped in gilt on the upper cover of a book, are also visually striking collectors’ items.  The volumes on display in this exhibit, all from the Law Library’s Rare Book Collection, range from the arms of an Italian Cardinal, to those of The Hague, to the monograms of British nobility.  The decorative bindings can be found on elaborate presentation copies which are unique artistic productions, or may grace a series with identical and more quotidian stamps.

Thirteen of the armorial bindings in the Rare Book Collection, and five in the case, have been identified in the British Armorial Bindings database, created by John Morris and continued and edited by Philip Oldfield.  The project is hosted by the University of Toronto libraries, under the sponsorship of The Bibliographical Society of London.  The database is an outstanding resource for further research, and I have also used it in preparing the exhibit.