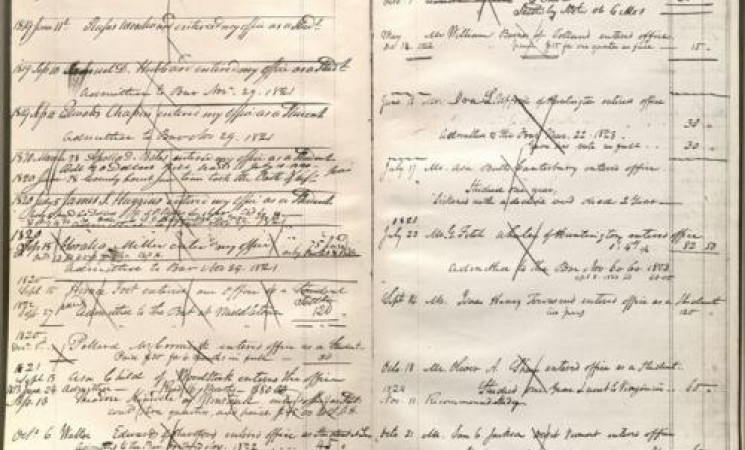 In his talk, von der Linn focused on three documents relating to the early history of the New Haven Law School, which eventually became the Yale Law School. One is an Aug. 6, 1842 letter from Samuel J. Hitchcock to the Yale Corporation requesting permission for the school to grant the LL.B. degree, which you can view here (the third image).

The second document is a brief article from the Nov. 13, 1824 issue of The Religious Intelligencer, a New Haven newspaper:

“The Law School established in this city, by Seth P. Staples, Esq. will hereafter be conducted by the Hon. David Daggett and S.J. Hitchcock, Esqs. Mr. Staples having removed to the city of New York. From the success of this school, which has been growing in reputation, and increasing in numbers ever since its establishment; – from the well known reputation of the gentlemen who are now at the head of it; and from the many literary and social advantages which may be enjoyed in New Haven, we have no doubt that it will soon be equal, if not superior, to any similar institution in this country.”

The third document, shown below, is a manuscript from the Law Library’s Rare Book collection titled “List of students who have entered the office” [of Staples & Hitchcock from June 11, 1819 to December 26, 1824].