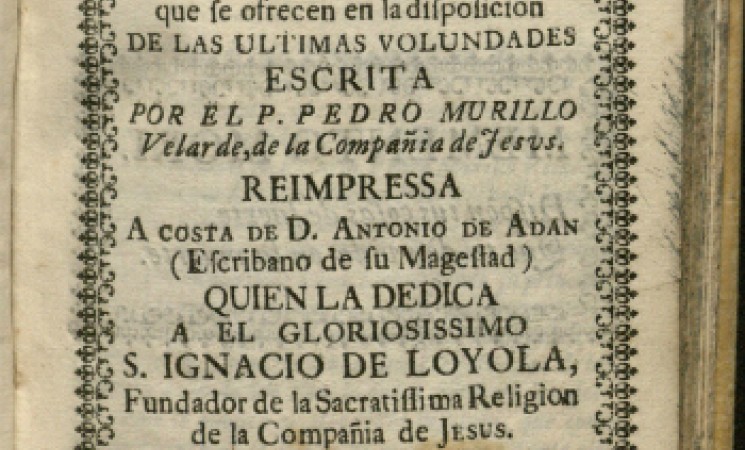 One of our latest acquisitions is a book I’ve sought for over twenty years, ever since my days at the University of Texas Law Library. It is Pedro Murillo Velarde’s Practica de testamentos (Mexico City, 1755), a pocket-size form book on the drafting of wills. The legal historian Hans W. Baade describes Practica de testamentos as a work of “towering importance.” In “The Form of Marriage in Spanish North America,” 61 Cornell Law Review 1 (1975), Baade wrote “It seems likely that the Practica was carried by priests, as occasion demanded, along with their breviaries, and that the wills drafted in Spanish North America followed, by and large, Murillo Velarde’s precedents.” As evidence of its influence in the Spanish Southwest, the opening chapter of the Kearney Code of Laws for the Government of the Territory of New Mexico (1865) states:

“The laws heretofore in force concerning descents, distributions, wills and testaments, as contained in the treatise on these subjects, written by Pedro Murillo [Velarde] De Lorde, shall remain in force so far as they are in conformity with the Constitution of the United States and the state laws in force for the time being.”

The author, Pedro Murillo Velarde (1696-1753), was a Jesuit priest who spent almost his entire career in the Philippines. He served as professor of canon law and theology in the University of Manila, as well as in numerous offices with the Jesuits. Murillo Velarde was a prolific author. His two-volume Cursus juris canonici, hispani, et indici, a textbook on canon law as practiced in Spain and its overseas empire, was considered the best 18th-century Spanish treatise on canon law. It was published in Madrid in 1743, 1763, and 1791.

Murillo Velarde  also authored an impressive ten-volume Geographía historica (Madrid, 1752). His map of the Philippines, Carta hydrographica y chorographica de las Yslas Filipinas (Manila, 1734), described in a June 9, 2015 CNN report as the “Mother of all Philippine maps” and the “Holy Grail of Philippine cartography,” is being submitted to the International Tribunal for the Law of the Sea in The Hague as evidence by the Philippines in a dispute with China over islands in the South China Sea.

Following the title page in the 1755 Practica de testamentos is a proverb in Spanish, with advice for those writing their last wills:

[Dispose wisely of your wealth

So that it gives you life in death.]