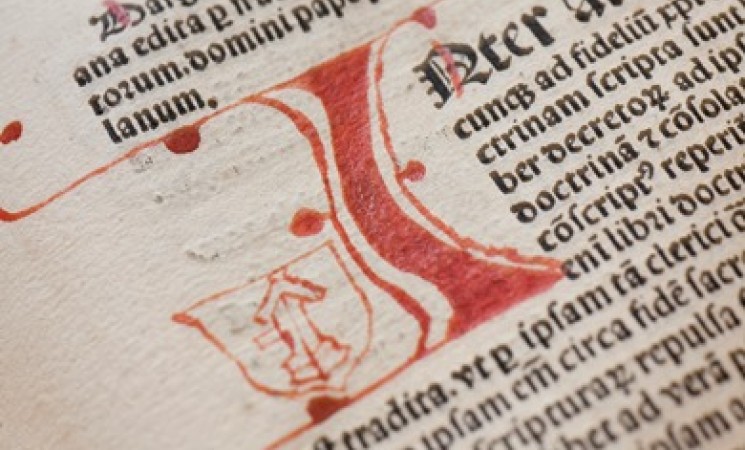 Rare law books often contain much more than meets the eye. Their value lies partly in their individual and particular histories, and the physical features and contexts which bring these to light. Things like bindings, binding fragments, bookplates and other ownership marks, inscriptions and annotations, illustrations, printing history and readership (among others), can provide insights into aspects of history, and legal history, which are understudied or unknown. The Law Library’s rare book collection is a rich source for information of this kind.  One – or in fact two – good examples can be found in the catalogue under the title Casus decretorum, held at the library in two early printed editions (Basel, 1489 and Leipzig, 1495-1500).

A beautiful image from the first of these books, shown above, was recently chosen for a poster which will hang in the stairwell connecting the Upper and Lower East Side of the Law Library. The image will help guide (and hopefully please) students and researchers going between levels, while the book itself is a study in navigating legal texts.

The Casus decretorum is a 13th-century gloss, or set of short, explanatory comments, on Gratian’s Decretum, one of the fundamental texts of canon law. The work was a revision by Bartolomeo da Brescia (d. 1258) of glosses written by a canonist named Benincasa da Siena (d. 1206). Slightly later, Bartolomeo revised the work of Johannes Teutonicus to create the standard gloss on the Decretum, the interpretative text read alongside the Decretum for centuries by European law students, jurists and clergy.

The Library’s first printed copy of the Casus decretorum (1489) is a first edition, complete with original wooden boards. Not uncommonly, the Casus is bound with other teaching texts in the same book, and would have been particularly useful for young students: included are the Syllogianthon of Lodovico Bolognini (Bologna, 1486) and the Margarita decreti of Martino Polono (Martinus Polonus) (Strasbourg, 1489).

There are truly unique features of the Casus decretorum. Opening the book, the reader can find medieval manuscript pastedowns, or leaves of parchment (generally calf/cow, sheep or goat skin) attached to the inside of the boards (see image below at bottom). The parchment leaves were likely used to protect pages from the wood. The manuscript written on them dates to about 1175-1250CE, and features texts of readings for two masses, both feast days of saints. The feast days also relate to luck and protection – which may be one reason they were chosen to protect this particular book. The parchment is fading, but the manuscript ink is probably as clear as when it was written, some 800 years ago.

The reader can also find leather tabs glued to the edges of various pages. Each title in the book is keyed with a leather tab, and these can be found on other pages as well (the Syllogianthon is tabbed at its index, for example). Some tabs may indicate sections that a 15th- or 16th-century reader used frequently – but it is a question for further study.

Convenient navigation is essential for law books. This is true for these texts as well, particularly because they were most likely used for basic teaching or easy reference. The Casus decretorum and Syllogianthon are organized according to the divisions in Gratian’s Decretum, while the Margarita decreti is itself a topical index to the Decretum. To help with navigation, all the texts are rubricated, a technique of adding colors – originally red – in order to emphasize certain words and passages. Although the texts are printed, the rubrication on them is done by hand, sometimes in vivid red, blue and green. This hand rubrication is also typical of incunables, books printed before 1501.

In the Casus and Syllogianthon, colored initial letters draw the reader’s eye to each principal division in Gratian’s text. Within each passage, colored markings also guide the reader to important citations. In the Syllogianthon, which provides fuller reference than the Casus decretorum, red, blue and green paragraph marks highlight citations to the standard gloss on Gratian’s Decretum, other passages within the Decretum, Biblical passages marshalled in support of the discussion and Roman law (see image below at left).

Some final, and interesting aids to navigation are added by readers themselves. There are annotations, sometimes simply as a note to oneself (a reader sometimes writes “note” in the margins), while in other places there are elaborate manicules, or drawings in the shape of a hand, indicating a notable passage (see image below right).

All of these were used – and were needed! – to get through the thicket of material in a typical legal text of the Renaissance. It should be easier to navigate a modern law book, or to get from the Upper to Lower East Side. But if the bright initial “I” from this book can act as a kind of signage, it has done (some of) its job!