New on the shelves: the first law book printed by a woman 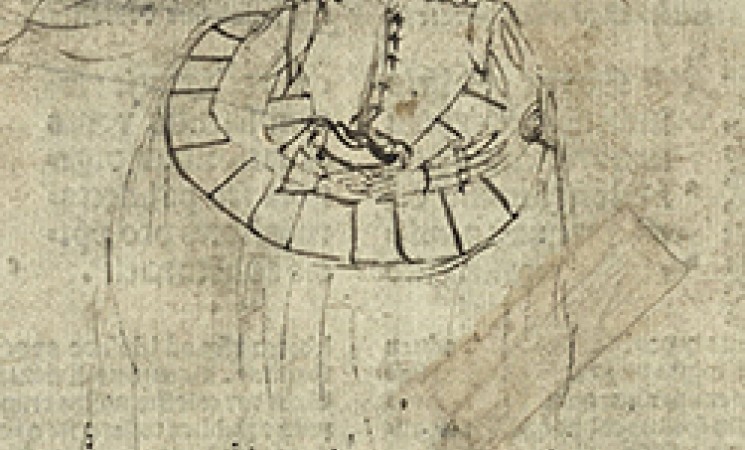 This drawing is found in one of our recent acquisitions. What makes it special is that the book is the very first law book printed by a woman: Argumentum Institutionum imperialium, an edition of Justinian’s Institutes printed in Paris in 1519 by Charlotte Guillard. A translation of the imprint at the bottom of the title page, shown below, reads: “Sold in Paris by the widow of the late Master Berthold Rembolt at the sign of the Golden Sun in the rue St. Jacques.” The book dealer who sold us the book, David Alexander Rueger of Antiquariat Inlibris, wrote me that the drawing “has no place in a legal textbook, and is ever-so-tempting to relate to the printer herself.”

The Argumentum Institutionum imperialium is a sophisticated publication, printed in red and black with notes by the legal scholar Jean Chappuis. An acrostic on the title page spells out the book’s title, INSTITUTIONES.

In early modern craft guilds such as printing, it was not unusual for widows to take over the businesses of their late husbands. Charlotte Guillard was not the first woman printer, but she is the consensus choice as the first woman printer of importance. She married Rembolt in 1502 and took over the business upon his death in 1518. The year after publishing the Institutes, Guillard married another prominent Paris printer, Claude Chevallon, a union that was perhaps as much a business merger as a domestic partnership. When Chevallon died in 1537, Madame Guillard once again took over the business. This time she appeared by name in the imprint, not simply as Chevallon’s widow. In the last two decades of her life, she published 158 religous, legal, and scientific works, including Church Fathers in the original Greek.


Law was one of Madame Guillard’s specialties, including canon law and several multivolume editions of the Corpus Juris Civilis edited by the humanist Gregor Haloander. Below is one example from our collection, Digestorum seu Pandectarum (Paris, 1552), volume 3 of 4. “Printed by Charlotte Guillard, widow of Claude Chevallon, & Guillaume Desboys, under the Golden Sun in the rue St. Jacques.”

Charlotte Guillard was not just a figurehead. Business records and statements by contemporaries prove that she was a highly respected publisher of scholarly works in a competitive Paris market. For a full account of her career, see Beatrice Beech, “Charlotte Guillard: A Sixteenth-Century Business Woman,” Renaissance Quarterly 36:3 (Autumn, 1983), 345-367. For more on women as publishers of legal literature, see our recent exhibition, “Evidence of Women: Women as Printers, Donors, and Owners of Law Texts,” curated by our 2015 Rare Book Fellow Anna Franz.