New on the shelves: an Inquisition trial 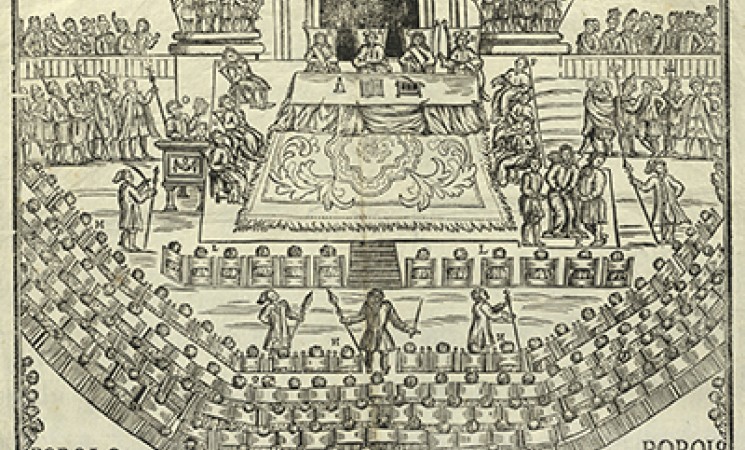 One of my favorite acquisitions at this spring’s New York Antiquarian Book Fair was an Italian broadside with an enormous woodcut of an Inquisition trial. The trial took place in Brescia in 1710. The defendant was a priest, Giuseppe Beccarelli, accused of promoting the heretical doctrine of Quietism, as well as sodomy. At the end of the trial he renounced a long list of principles, and spent the last six years of his life in prison. Ours may be the only surviving copy; no other copies are listed in WorldCat or other union catalogs.

Britannica Online describes Quietism as “A doctrine of Christian spirituality that, in general, holds that perfection consists in passivity (quiet) of the soul, in the suppression of human effort so that divine action may have full play.” The main proponent of Quietism was a Spanish priest active in Rome, Miguel de Molinos, whose teachings were condemned in 1687.

An alphabetic key beneath the woodcut identifies all the main participants, including the presiding officer, Cardinal Gianalberto Badoaro, the accused (“Il Beccarello”), the inquisitors, clergy, local officials, nobles, and finally, at the extreme edges, the general public (“Popolo”).

A detailed description of Beccarelli’s trial can be found in The Inquisitor in the Hat Shop: Inquisition, Forbidden Books, and Unbelief in Early Modern Venice by Federico Barbierato (Burlington, VT: Ashgate, 2012).