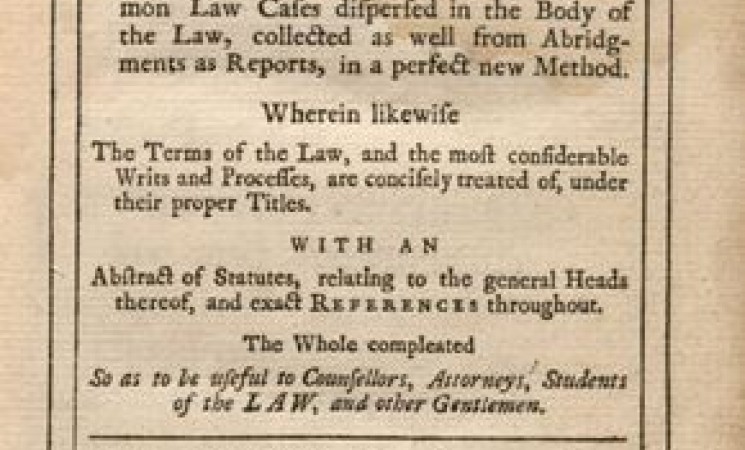 The common law common-placed : containing, the substance and effect of all the common law cases dispersed in the body of the law (London, 1726)

Giles Jacob (1686–1744), the leading legal writer of his age, was notable less for his style—Alexander Pope lampooned him in his Dunciad, calling Jacob “the blunderbuss of the law”—than for the variety and influence of his work. Jacob was prolific, and some of his efforts aimed to reach relatively new markets. The Students Companion, or, Reason of the Law (1743), like Jacob’s The Common Law Common-Placed (1726), were among a growing number of printed books intended to help law students with their studies. The Students Companion organized and digested statutes and cases, while The Common Law Common-Placed served as a ready commonplace book and reference guide for legal terms. The latter also attracted critics who felt that printed study aids took away the useful work of manual notetaking.


Jacob branched into areas that had not been treated in print before. His Lex Mercatoria, or, The Merchant’s Companion (1718), was the first guide written by a common lawyer in English on the subject of the law merchant, or customs of foreign trade.  The work was published by Edmund Curll, a successful Londoner whose mercenary publishing tactics also earned him the barbs of Pope. Both Curll and Jacob feuded with Pope publicly and in literary form for his separate invectives against them. Jacob’s law publishing career remained profitable, and his final work, Every Man his Own Lawyer (1788), a guide for citizens involved in litigation, was a great success. The Library’s 1788 edition of Every Man his Own Lawyer is one of two acquired from the Taussig collection, and contains an interesting new preface complaining against the introduction of English as the language of court and the abrogation of court hand.

Even in 1788, Jacob’s editor defended the deceased writer against Pope’s criticism: if he was a blunderbuss, the many editions of his works “were of good report.”

From the Taussig collection the Library has acquired twenty-seven editions of Jacob’s works.