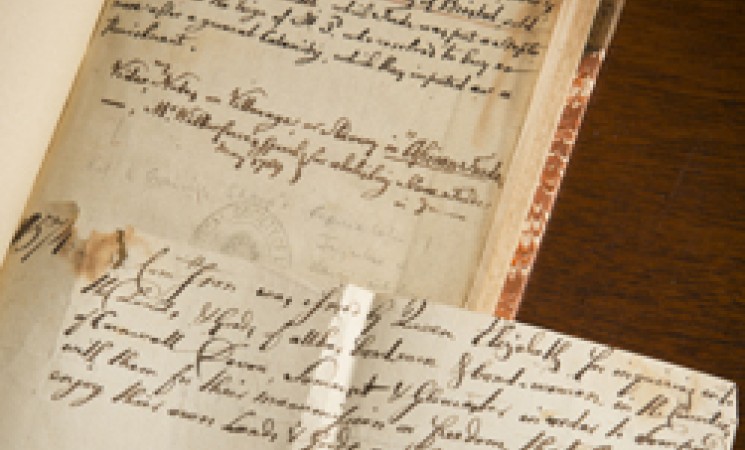 Argument in the Case of James Sommersett a Negro (1772), with Granville Sharp's handwritten notes. Photo by Harold Shapiro.

Among all the volumes our library acquired from Anthony Taussig, few hold as much historical significance or research potential as those authored or owned by Granville Sharp (1735-1813), one of the founders of the British abolition movement.

The most notable is the book pictured at left, Sharp’s own copy of Francis Hargrave’s Argument in the case of James Sommersett a Negro, lately determined by the Court of King’s Bench: wherein it is attempted to demonstrate the present unlawfulness of domestic slavery in England (London, 1772). Sommersett v. Stewart (20 State Trials 1 (K.B. 1772)) is one of the landmark cases in the abolition of slavery, with Lord Mansfield ruling that a slave became free when he set foot on English soil. James Somerset had come from Virginia with his master and sought refuge with Sharp after his escape. Sharp himself orchestrated Somerset’s defense. Sharp annotated this copy with extensive notes, some of them tipped in on separate sheets.

For more on the research potential of this outstanding little book, see “Sharp’s Numbers” in Mark Weiner’s Worlds of Law blog, which includes a video interview Mark did with me about the book.

Another of the acquisitions, Sharp’s Representation of the injustice and dangerous tendency of tolerating slavery or of admitting the least claim of private  property in the persons of men, in England (London, 1769), is considered to be the first British anti-slavery tract.

Several of the titles are products of Granville Sharp’s advocacy for Parliamentary reform and civil rights. These include A declaration of the people’s natural right to a share in the legislature (London, 1775) , where he argued for representation of the American colonies in Parliament, and The legal means of political reformation (7th ed.; London, 1780?), Taussig’s copy inscribed “The gift of the Author”.

Another volume that belonged to Sharp demonstrates his interest in Campbell v. Hall (20 State Trials 239 (K.B. 1774)), an important case involving the application of common law in England’s colonies. The volume contains two pamphlets from the trial, Campbell esq. against Hall esq.: the first argument in this cause upon the special verdict, Hilary-term, 1774 [London?, 1774?] and Lord Mansfield’s speech in giving the judgment of the Court of King’s-bench … in the cause of Campbell against Hall (London, 1775). Sharp wrote extensive notes in the margins, as shown below, and on tipped-in sheets. Modern scholars have looked to Campbell v. Hall on the question of whether Lord Mansfield’s decision in the Somerset case had any relevance for slavery the colonies; see George Van Cleve, “Somerset’s Case and Its Antecedents in Imperial Perspective,” 24 Law & History Review 601 (2006) and the accompanying commentaries. Was Sharp was asking the same question? Come see for yourself; there’s a good research paper or article lurking here.

Campbell esq. against Hall esq.: the first argument in this cause upon the special verdict, Hilary-term, 1774 [London?, 1774?], showing Granville Sharp’s handwritten notes.