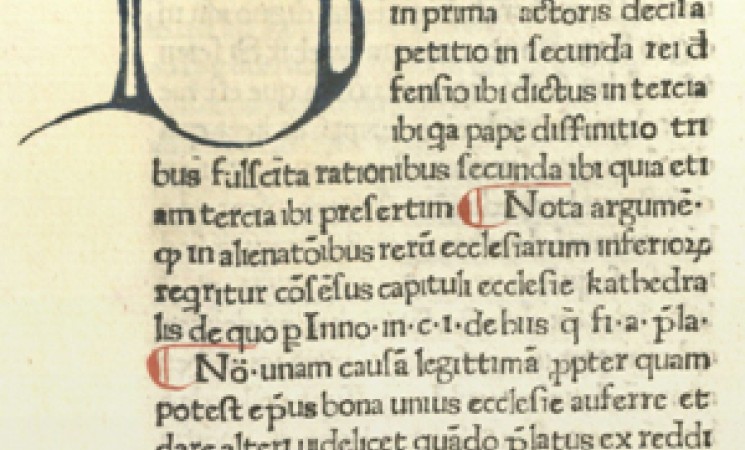 The author, Dominicus de Sancto Geminiano (a.k.a. Domenico da San Gimignano), was considered one of the best canonists of his time. He taught law at Bologna’s famous law school, where he earned a doctorate in canon law in 1402, and was an official in the papal law courts. He was a prolific author. This commentary on the Liber Sextus is one of his most important works.


In his Bibliographical Decameron (1817), Thomas Frognall Dibdin refers to the book’s printer, Adam Rot, as “that subtle and coy typographical artist … of whom we know little or nothing in this country.” Not much has been learned since then. Rot was one of the early group of German printers in Rome. The Incunabula Short Title Catalogue lists 37 titles printed by Rot in the period 1471-1474. He published several volumes of consilia by various jurists. He was the first publisher of guidebooks for pilgrims to Rome. The Super secunda parte sexti libri decretalium is Rot’s earliest book bearing an imprint date.


Our copy is printed in roman type, with elegant hand-drawn initials in alternating red and blue, and red paragraph marks.