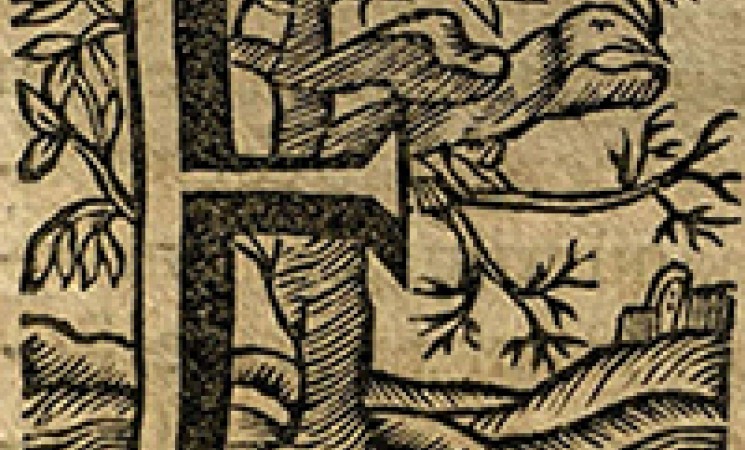 Those who monitor our Flickr site may have become aware of my latest obsession: woodcut and engraved initial letters. I am compiling examples from our Rare Book Collection in an album entitled “Decorative initials.”

The capital “F” at left is from a dissertation submitted to Leipzig University in 1721 for a doctorate in law (Alexander Augustus Arnold, Dissertationem juridicam De declinanda recognitione documentorum propter deficientem causam debendi in processu executivo (Leipzig: Immanuel Tietze, 1721)). German legal dissertations like this one are a rich source of woodcut initials and other decorative elements. The Law Library has thousands of these German legal dissertations. Written in Latin on topics that are now arcane and obsolete. For me, their typography and decorations are now their most interesting features. Several of them are featured in our current exhibition, “Law Books Bright and Beautiful.”

Decorated initials are still used in modern graphic design. They made their first appearance about fifteen hundred years ago and represent a survival from early Western manuscript culture. Their function has always been to mark the beginning or major divisions of a text. The more elaborate initials, adorned with gold leaf, are called illuminated initials, such as this one marking the opening of a 14th-century manuscript of the Constitutions of Pope John XXII:

Old habits die hard, among both publishers and readers. As a result, printed books from the first half-century of printing left spaces in the opening lines of text, which could be filled with illuminated initials like the ones found in medieval manuscripts:

Soon printers began using woodcut initials to take the place of the painted initials. They are called “historiated” initials when their decoration includes human or animal figures, such as this one from the “Law Books Bright and Beautiful” exhibit:

In the late 17th century, printers began using copperplate engravings for initials, which provide much finer detail than woodcuts. Unlike woodcuts, however, engravings had to be printed on a different press, thus requiring patience and skill to print the engraved initial in the blank space left in the printed text. Below is one of the fine engraved initials from Thomas Madox’s History and antiquities of the Exchequer of the kings of England (London: J. Matthews, 1711). Note the faint marks around the edge left by the engraved plate:

Thomas Madox’s History and antiquities of the Exchequer of the kings of England (London: Printed by J. Matthews, 1711). Full image in Flickr.

Decorated initials went out of fashion in the late 18th century as book design became more austere. They returned in modern times with the fine printing renaissance. Brian McGinty’s Haraszthy at the Mint (Los Angeles: Dawson’s Book Shop, 1975), also from the “Law Books Bright and Beautiful” exhibit, is an example:

I close with a couple more of my favorite woodcut initials from German legal dissertations. To learn more about woodcuts and engravings, there is no better starting place than “Woodcut, engraving, or what?”, an illustrated explanation by Erin Blake at The Collation, the excellent blog of the Folger Shakespeare Library.